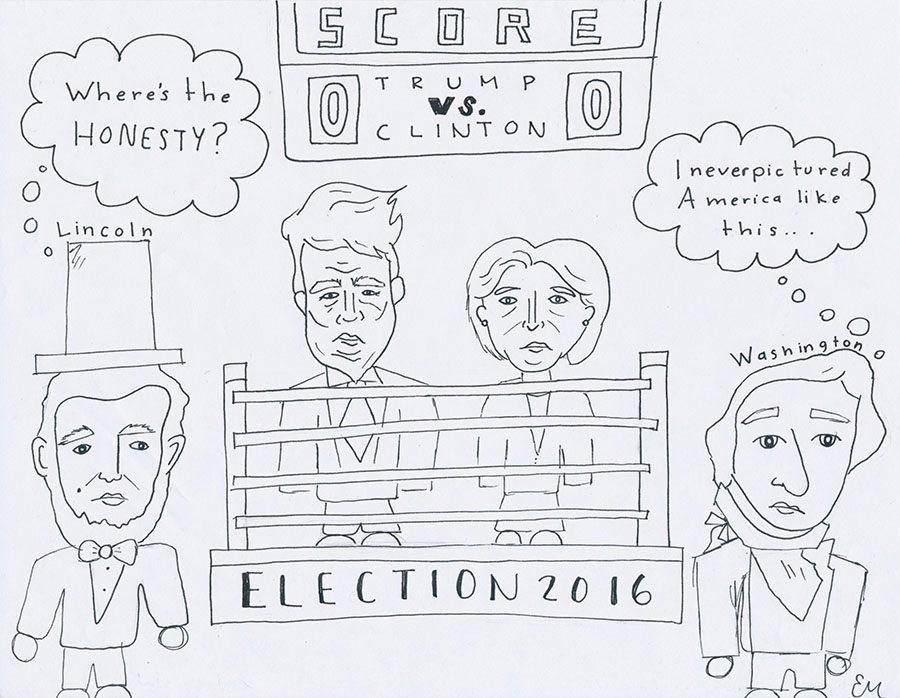 Presidents are supposed to be honest, respectful and focused on the task at hand. They are expected to lead by example and do the right thing even when no one is listening. Sadly, this description doesn’t remotely fit either of the final two candidates. Both Donald Trump and Hillary Clinton have bickered over who should become the next president, but the truth is, neither are fit to become the next President.

Donald Trump, the self-proclaimed solution to all of America’s problems, led his campaign through a series of childish acts all while insulting women, Hispanics, African-Americans, Muslims and Democrats. He managed to alienate half of the United States populations and somehow still has the Republican nomination. Donald Trump, although possibly having the economic prowess to somewhat pull the country out of debt, doesn’t fit the bill of the prototypical president. Trump is downright crude and disrespectful. He called women fat, pigs and brainless as well as saying women aren’t useful unless they’re pretty. If Donald Trump is elected president he plans to build a wall that will span the whole southern border between Mexico and the United States. Experts say this wall will cost up to $25 billion which will only put the United States further in debt. Trump also has a slew of other beliefs and ideas such as banning the immigration of Muslims and believes that Mexican immigrants are rapists and criminals. Donald Trump simply isn’t adequate enough to be one of the most powerful people in the world. An immature, self-entitled, sexist man should not be the face of our country.

Although Hillary Clinton doesn’t seem to be as rash as her opponent, she has a string of scandals, lost emails and crude remarks that have followed her much like Trump. Hillary Clinton has been intertwined with the government ever since 1983, and has been right in the middle of dozens of scandals. Her first scandal was when her husband, 49 year-old President Bill Clinton had an affair with 22 year-old Monica Lewinsky in 1995. Since then, Bill Clinton has been accused of sexual assault multiple times, and the Clintons have been accused of hiring people to silence accusers through black-mail and other assorted techniques. Several people that have had ties to the Clintons have wound up dead in several suspicious ways. Hillary Clinton’s most recent scandal has to do with her private server that was hacked and released thousands of emails that held classified information. WikiLeaks has released emails daily that came from Clinton’s private server. Hillary Clinton’s scandals are proof that she can not be trusted with the top-secret information that comes along with being president.

The election should not be a pick between the lesser of two evils; it shouldn’t be a pick between who will mess up the least. The election should be a pick of who will best enable the country to prosper for the next four years. We should not have to pick between a selfish, disrespectful billionaire and a robotic, corrupt politician. In four years the majority of students that attend this school will be able to vote and we should use this election and candidates as an -example of what a presidential election shouldn’t look like. Our votes are our voice in the government and we should ensure that we pick people that not only better our country but the world as well.