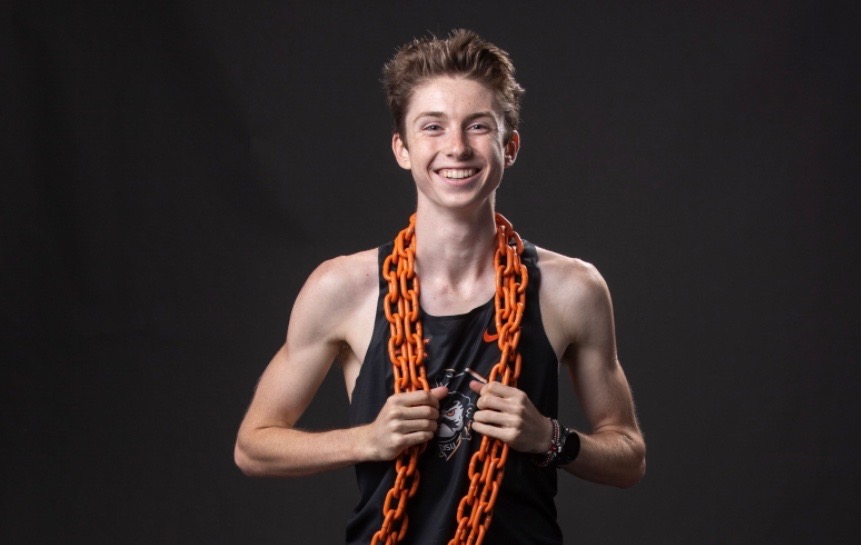 Senior Grant Wilcox committed to a Division I college for cross-country on Oct. 21 after receiving an athletic scholarship from Oklahoma State University.

“His goal has been to run at a Division I school,” mother Lauri Wilcox said. “I think he’s thrilled that he’s good enough that some amazing programs wanted him.”

“It’s the best feeling in the world,” Grant said. “The feeling of accomplishment and self-satisfaction is the best part about running; that’s why I do it everyday.”

Being a part of cross-country requires several hours of work on a daily basis in order to be successful. Grant often wakes up at 6 a.m. Saturday mornings to practice running for upcoming meets.

“Grant’s work ethic is second to none,” cross-country coach Robert Reed said. “His determination to be successful has been an excellent example for our team.”

Grant’s teammates consider him a leader in the way he prides himself through practices and meets as well as his ability to stay focused.

“He always gets us all together when we’re fooling around and he brings the team together,” junior cross-country runner Travis Jasper said. “We all look up to him.”

Apart from being a cross-country runner, Grant balances both academics and athletics. He has to sacrifice hanging out with his friends in an effort to maximize his full potential.

“It’s kind of hard to think about all the times I missed out with my friends,” Wilcox said. “But at the end of the day I think it was 100% worth it.”

Throughout Grant’s cross-country career he has maintained a positive attitude towards the people around him.

“As a person, Grant is one of the most respectful and genuine students I have ever coached,” Reed said. “He is a model student-athlete and does everything the right way. Even with his success, Grant has stayed grounded and humble throughout his career.”

Grant hopes to continue to make the people around him proud once he goes to Oklahoma State University.

“The main thing is we just want him to be happy,” Mrs. Wilcox said. “If this is something that would make him feel happy and fulfilled along with getting an education, we think it’s wonderful. We’re very proud.”