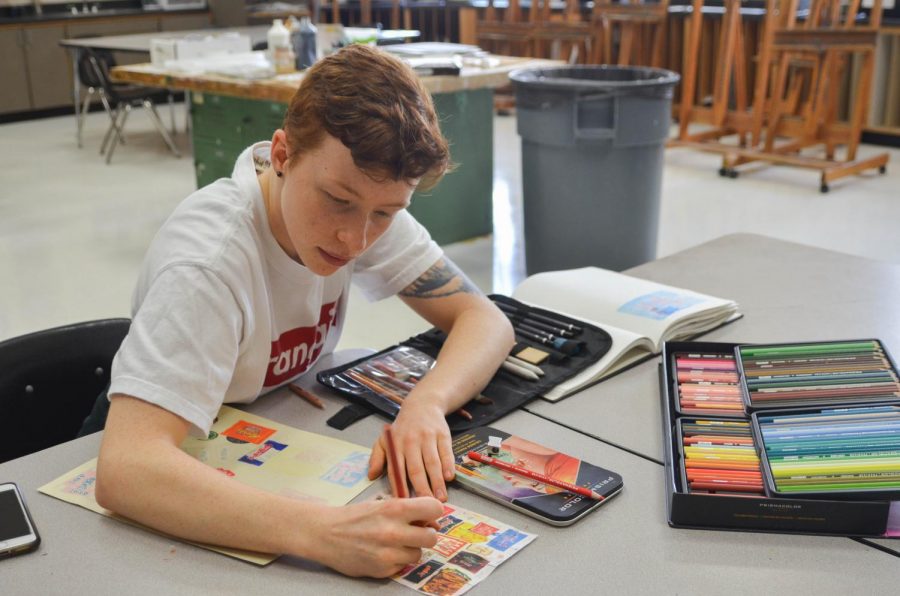 Mid-last year, junior Max Mosely came out to his friends as genderfluid. He questioned his gender prior to coming out but wasn’t sure of exactly how he identified. He says it helped him emotionally to express how he felt to his friends about exploring his gender identity, though at first, he was afraid that teachers and classmates would treat him differently. Now, Mosely identifies as male and proves his resilience in facing challenges as an openly transgender student.

Mosely moved to Plano from Austin 12 years ago. Despite a rising tolerance of members of the LGBTQIA+ community in the U.S., trans people are still verbally harassed and physically assaulted. According to the Human Rights Campaign, at least 18 transgender people were fatally targeted in 2019. Mosely notices the cultural differences between Austin and Plano regarding the treatment of the LGBTQIA+ community.

“Austin is a lot more open than [Plano],” Mosely said. “It’s so crazy. Everybody’s very, very, very open [in Austin].  For the most part, it’s not horrible. It’s not [very] strict like it is in a lot of the southern area. It’s still hard to come out; it’s still Texas; it’s still the belt buckle of the Bible Belt.”

Despite conservative, religious and ethnic influences, Mosely experiences an accepting culture at school. When he first came out to his friends, other students began to hear that he went by a different name and respected the change. However, a couple of teachers still refused to use his preferred name and pronouns (he/him/his).

“We review how we respond to different situations and we make sure that we are consistent, we make sure that we’re responding appropriately,” Principal George King said. “[Are there] trends where LGBT kids are perhaps experiencing harassment and bullying more than others? The answer is no, not here at Plano East. And I think that’s less of a reflection of what we’re doing and more of a reflection of the tolerance and open-mindedness of [this] generation.”

Bathroom use is a concern for all transgender people. Surrounding the controversial consideration of passing the 2017 bathroom bill in Texas, Plano ISD released a statement to administrators that communicated the district’s lack of policy addressing bathroom use by transgender students. This statement also assured that students could receive individual accommodations.

It took a period of depression and then active self-acceptance for Mosely to become secure enough in himself that the actions of others — including disregarding his name/gender preference, offering to “fix” him, and calling him a “thing/it” — don’t bother him as much now as they did when he initially came out.

“I make sure to correct people when they’re using the wrong pronouns because I know a lot of people aren’t used to that, but it’s not something that should be excused so easily,” said junior Chloe Tee, one of Mosely’s best friends. “It’s not that hard. [If someone says] ‘Oh, my dog is actually a she,’  [people will] automatically switch [pronouns], so it shouldn’t be hard for [them] to do that [for] a person either.”

Mosely unconsciously questioned his gender identity from a very young age, but started coming to terms with it once he figured out what being transgender meant in middle school.

“I do still struggle a lot with being transgender, but in order to accept it I really had to push myself to see who I was,” Mosely said. “It took so long because I didn’t know who I was because I kept pretending to be someone else for years. So, trying to find [out] who I was — not who I was pretending to be — was the hardest part. ”

Family is a huge source of support for Mosely. He wasn’t sure what to anticipate from them when he came out, but the acceptance he received helped him persevere. Mosely’s dad said “it’s whatever” in regards to him being transgender because he doesn’t care that Mosely is transgender as long as he is happy.

“There’s emotional difficulty in figuring out really what Max needs from us the most and what level of support is needed,” Mosely’s mother, Paulina, said. “[We’re] trying to actually convey to Max that it really is okay, that we really are supportive. We are not just saying that and [we’re] also just conveying our belief that things are going to work out, that they’re going to be okay.”

The 2015 U.S. Transgender Survey is the largest recent survey on transgender people in the U.S., according to GLAAD, a prominent organization in the advocacy of LGBTQIA+ rights. Its findings include that 77% of individuals perceived to be transgender in school had negative experiences as adolescents (verbal harassment, physical attack, sexual assault, leaving/expulsion from school). These individuals were 47% likely to experience serious psychological distress.

“I think all of those statistics tell a tragic tale,” King said. “Look at the intolerance that we see in the world today: if we look at people who are intolerant, you’ll find problems and conflict. If you look at communities that are tolerant and embrace people different from themselves, you’ll find a thriving, welcoming, peaceful community. And that’s the message that I send to teachers and students. That’s the culture we want here.”