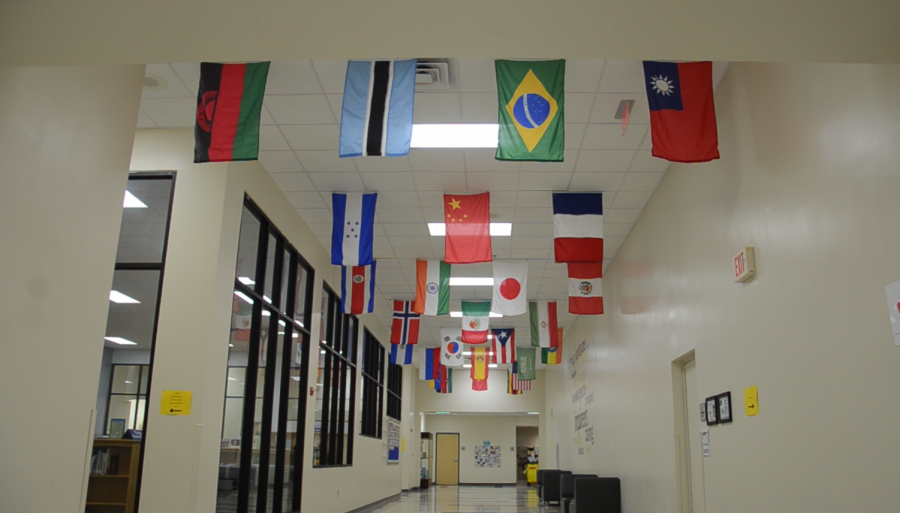 Flags line the ceiling of the Huffman Elementary lobby on April 30.

by Saifiyah Zaki and Abby Blasingame

A ceiling decked with flags from all around the world, hallways lined with phrases in Mandarin and Spanish, and walls promoting worldly connections greet visitors as they walk into Huffman Elementary. This spirit of internationalism comes from the International Baccalaureate Primary Years Programme (PYP) established at the school in 2016, which awaits the official IB designation and will officially open its doors to students selected by a lottery system in the fall of next year.

“I was very interested in starting a program that dealt in very student-centered learning,” IB director Amy Moore said. “It mirrored a lot of what I did previously as a PACE teacher, but I love the idea that with [the IB] inquiry philosophy, all kids could do it.”

The program grew out of the district’s plan to open a choice school at the elementary level. These schools already exist at the secondary level where high school students can choose to enroll in the STEM Academy, the IB Diploma Programme or the Health Science program. During the decision process, district officials considered a wide range of choice options including Montessori and project-based programs.

“[The district] looked at IB and from what I understand, overwhelmingly IB became the best choice,” Moore said.

Once the district settled on the IB program, Moore worked with the principal and assistant principal to create a staff. Teachers already working at Huffman had the opportunity to apply and those not interested were placed at other schools.

“It allowed us to begin a program with people that were on board and really wanted to be a part of the IB experience,” Moore said. “We don’t necessarily teach the curriculum in the same way, so knowing that coming on, they had to be on board with the amount of work that was in front of them.”
Carefully Curated Curriculum
Although it has yet to officially become a part of the IB, aspects of the IB curriculum are already in place at the school. In creating this curriculum, the staff utilizes the district-wide “backwards design” system where planning begins with the end goal, or what teachers want students to walk away with, and is then broken down into assessments and activities, also known as learning engagements, rather than planning activities first. Those end goals and central ideas typically coincide with aspects of the six themes IB provides as a guide for the program. However, the state-required TEKS must also be incorporated into the curriculum, requiring restructuring the traditional order for teaching.

“[Restructuring] takes some creativity because it’s definitely not the way we’ve been teaching most of our lives,” first grade teacher Beth Schwartz said. “But it starts to come naturally and it makes a lot more sense to the kids.”

The six IB themes standardize PYP schools across the world, allowing for communication with students in other countries. The fourth grade team utilized this opportunity, creating a pen-pal experience with students from Finland.

“It’s a really neat opportunity to make connections with schools around the world,” Moore said. “Being able to see some similarities [they shared] but also figure out some differences and being able to write back and forth was a neat experience for them.”

These themes translate into every subject, creating an interdisciplinary system in which students can make connections between all of their classes.

“Since our learning is so integrated, it opens the pathways for all students to be successful,” teacher Ellen Frawley said. “If they’re not strong in one area — or if they feel like they’re not natural in math — because we’re so integrated, they still have opportunity to thrive here.”

Another important part of the curriculum is a focus on foreign language. Students attend a Mandarin class beginning in pre-K all the way through fifth grade and also learn some Spanish.

“It’s not necessarily just the fact that you’re learning how to speak another language,” Moore said. “One of the biggest takeaways is that you are able to learn about and explore other cultures, which really allows our students to explore perspective.”

Although students learn a lot of vocabulary, the primary focus of the foreign language class is to teach about the Mandarin culture and traditions to expand the students’ sense of the world.

“When you go to the business world or any career you will run into somebody that you can speak Mandarin with, or you can use the language that you know to make connections with others,” Mandarin teacher Gloria Teng said. “It can create opportunities for you no matter if you’re in your career or just improving interpersonal relationships.”
No Lights, No Camera, Just Action
A unique part of the program is the “action” piece where students take what they’ve learned and do something using that knowledge in a project. For example, fourth grade students learning about movement as their central idea started considering the movement of ideas and decided to build a Little Free Library in front of the school so students could exchange books they’ve read.

“I love when ideas go that way,” Moore said. “When they’re able to express what they’ve learned and actually now it’s making a difference for them or for other people, that’s probably the best part of what we see in the end.”

Action is a large part of the IB Diploma Programme at the high school level as well. It’s incorporated into the Community, Activity and Service (CAS) component of the program, where students must commit around 150 hours to community service or creative activities and reflect on them. Another part of the program that carries over to the secondary level is the IB Learner Profile, a set of 10 traits that all IB students are taught to exhibit.

“It’s neat to see that [the learner profile] vocabulary is used with pre-k and kindergarten students just as much as it is being used with 16, 17, 18 year old students,” Moore said. “It really is something that’s in the forefront of our curriculum.”

The programs are intended to be used in a continuum at the elementary, middle school and high school level, but the district doesn’t currently have an IB middle school established.

“The idea is that the enhancements that you’re going to get in this program that are different from other programs will prepare you for any situation that you go into, as far as middle school,” Moore said. “All we’re doing is trying to develop good human beings.”

Administrators at the school and district officials began heavily promoting the program this year and now have 100 families joining the school, selected by a lottery system. They await the official IB designation after a thorough observation from IB officials in April, which could take anywhere from three to six months. In the meantime, the Huffman staff works to improve their work and teaching.

“People ask me what I’m most proud of after these two years,” Moore said. “It’s the learning and the growing that’s happened, just seeing where [the students] started, where they’re going, and what they’re becoming. It’s really neat to see.”