Seniors bring it on 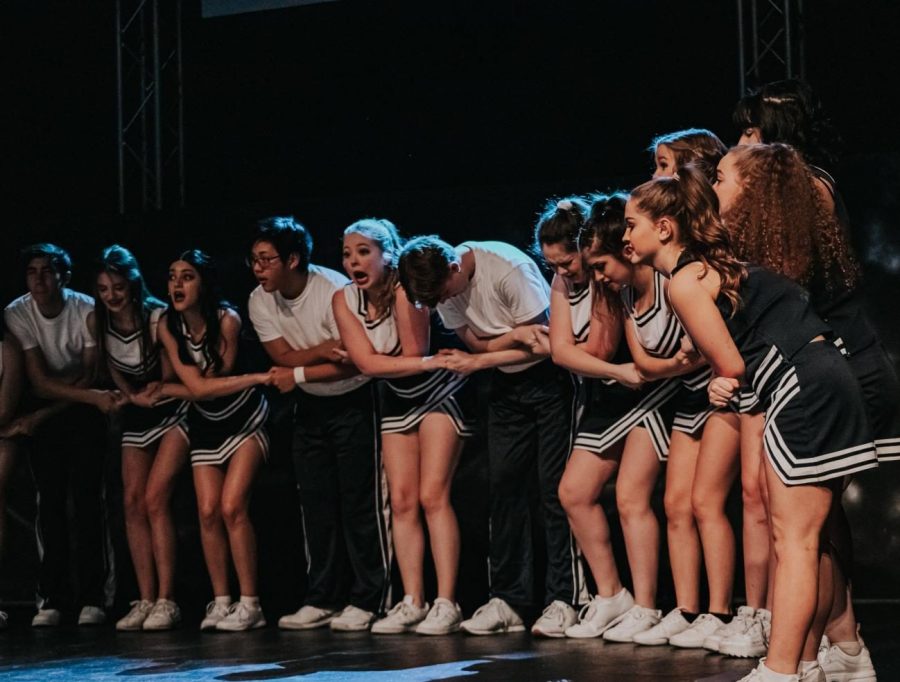 Bow out: Student actors in the musical "Bring It On" link arms and bow together. The show marked the last musical for many seniors. “It’s not like we just have next year to make it better,” Atwell said. "This is it."

The curtain closed on Jan. 23-25, not only on the last musical of this year, but on a significant chapter in many seniors’ lives. For some seniors, this musical is unlike any other they’ve done because they help run the show in addition to performing for the last time in their high school career. The musical, “Bring It On,” is about cheerleaders from two different schools who compete against each other.

“Bring It On” is more student-controlled than previous musicals and so are the roles played. For instance, senior Cassie Pierce takes part in the cheerleader ensemble as well as fulfilling other responsibilities for the musical.

“You get to take more charge when you are a senior and have more input into the musical because the director really works with the students,” Pierce said. “[As a senior], I’m proud of the work I have done.”

However, seniors still have to focus on performing. The students take an active role at practices during and after school, but the hours can vary depending on the day of the week. The weekdays have shorter practice hours that run for two hours while the weekend practices last at least six hours. However, during tech week — a week dedicated to running through the whole show — they reach as much as twelve hours.

“Something I know that I do a lot is [getting too] caught up in all the stressful stuff and [not thinking] about how you can have so much fun right now performing,” senior Evie Atwell said. “It’s what I love to do and I missed out [in the past] because I wasn’t in the moment.”

Danny Miranda was brought in to teach the students how to cheer and safely perform a stunt.

“Another thing that’s cool about this show is that most of us don’t have any cheer experience, [yet] it’s about cheer competitions,” Schlaff said.

The students spent time learning dances and cheers to perform something new for family and friends.

“We work hard,” Pierce said. “The students do a lot of work besides just showing up and [doing what] the director [tells them] to do. There’s so much involvement with the choreography and the publicity that goes on.”

Theatre has brought different experinces into the students’ lives throughout the years, and seniors feel happy that their classmates, teachers and families can see all the work they put in to making it happen for the last time in their high school career.

“Part of theatre is learning about different parts of life that you might not experience on a daily basis,” Schlaff said.