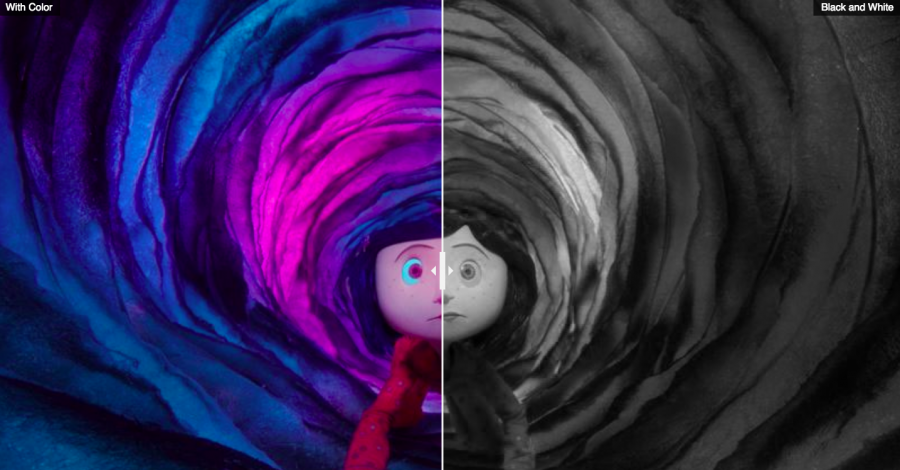 "Coraline" with and without color.

Color use and vivid imagery, combined with good writing and acting, are what turn movies into cinematic works of art. Since the color revolution of television in the 60s, film has never been the same. Psychologically, different colors convey different meanings and messages. Whether only select characters are dressed in or screens are completely saturated with a specific color, movie-makers and designers always consider the breakdown of color in their projects. Through the nuanced use of colors, directors have been able to communicate to viewers both directly physically and verbally as well as subconsciously and visually.

The contrasts between the colored images and the black and white images demonstrate the importance of color in film.

Julia Roberts’ iconic red dress in “Pretty Woman” (1990) perfectly encompasses the strength and passion emanated by Roberts’ character, Vivian, a prostitute who changes public perceptions of sex work and the dynamic of classism.

Wes Anderson is a director known in the film world for his iconic use of color and symmetry. While soft pastel blues and pinks are a common throughout his film, his use of yellow, especially in films such as “Darjeeling Limited” (2007), evoke youthful feelings of hope and idealism.

While it may seem obviously fitting for a film named “Green Room” (2016) to have a monochromatic color scheme throughout the movie, it actually serves a purpose other than following through with its namesake. Green usually represents harmony, peace and renewal, but in “Green Room,” the dark and violent scenes of the movie contrast with traditional concepts of green. With yellowed hues of green, some scenes also promote a sense of sickness and cowardice.

Caught in webs of infidelity, mystery and murder, “Written on the Wind” (1956) showcases a consistent theme of blue hues threaded into the movie. While blue is generally used to convey feelings of trust, stability, loyalty and calm, the action and emotion on-screen emote anything but.

Although purple is most commonly known as a symbol of royalty and regality, it can represent so much more than that. In the 2009 stop animation movie “Coraline,” the heroine by the same name makes her way into a world of mystery, danger, magic and allure. Throughout the movie, Coraline transforms as her character continues to develop.